On a low, sleek plinth of the National Gallery of Victoria, Alex Goad’s artificial reef structure blends in seamlessly with other Modernist installations.

The arch of interconnected modules, produced using three-dimensional printers, is part of an exhibition featuring creative professionals who fuse design, technology and science to imagine the future.

It’s visually pleasing in bright white. The bumpy, lattice-like construction is very tactile and tall enough that visitors can experience it from the inside, like a sheltered fish.

About 9,000 km away, in the Maldives, groups of the same modules rest on the seabed off Summer Island.

Three years ago, bare building blocks were quickly put together by divers, and these days they are covered in coral, sponges and algae and also serve as a refuge for tropical marine species.

The coral fragments that were implanted on the structure are now mature and have been joined by a bunch of natural recruits.

It’s a satisfying proof of concept for Goad, an industrial designer who seems to fall somewhere between artist, inventor, environmentalist and science lover.

Its high-tech laboratory in a warehouse in Melbourne is equipped with banks of 3D printers that bring its marine salvage aids to life.

MARS has yet to be used in Australia but another Goad invention is not difficult to find in Sydney.

At the edge of Rushcutters Bay harbor and Milsons Point below the bridge in Balmain and Barangaroo, the harbor’s flat walls were fitted with panels he designed for the Living Seawall program at the Sydney Institute of Marine Science (SIMS).

The visual effect is that of a three-dimensional mosaic on the waterline – a piece of public art that appears and disappears with the changing tide.

But the panels are science in action, transforming man-made structures hostile to biodiversity into complex grooved and dimpled habitat for anything that wants to take hold.

Much depends on the conditions at each site, but in some ports encrusting oyster layers have formed.

SIMS scientists have reported an increase of up to 36% in the number of fish, algae and invertebrates in living dike areas.

When art and science come together

The process involves an intensive period of design and then fine-tuning, in consultation with marine environmentalists.

The prototypes are 3D printed, refined a little more, and finally when a product is ready, it is manufactured with traditional techniques of concrete or ceramic casting, to save time and costs.

“In these highly degraded and completely altered unnatural environments, we use these tools and methodologies to try to find a kind of hybrid between what would grow naturally and what we have to implement, as a human-made structure. , to try to improve the ecology, ”says Goad. 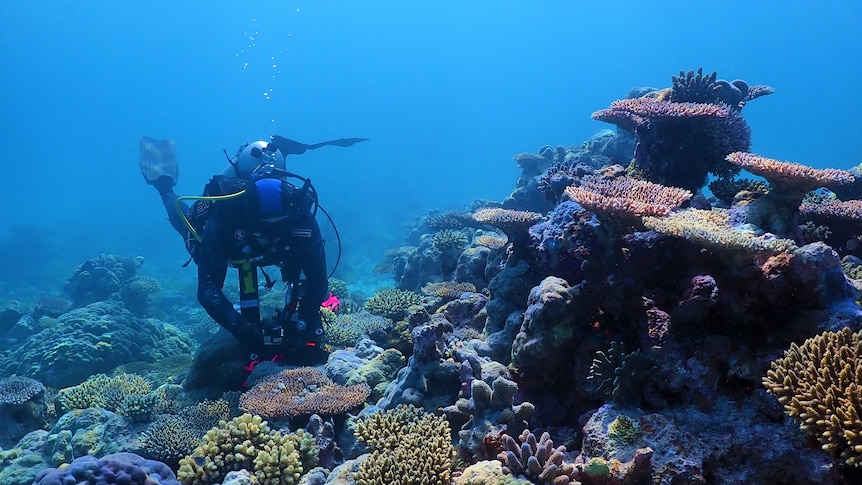 The equivalent of more of all living coral in Australia has been lost in less than a decade, according to a recent report, but a distant reef about 200 km off Western Australia is showing signs of hope.

“But if we are going to come up with these new ecological structures, we have to know that they work and that they will not be a refuge for invasive species, for example.

“This is why collaboration with researchers is so important.”

But Goad says it’s also paramount to imagine and craft tools that respect beauty, objects that spark curiosity, invite questions, and inspire conversations about what humans can do in the future to support. a degraded planet.

He is grateful that some of his work has been incorporated into the permanent collection of the Museum of Modern Art in New York and is regularly exhibited in museums and galleries in China and abroad.

“I think a lot of this work is communication so that we can start to influence change, different ways of doing things,” he says.

“And a great way to do that is through culture, to engage with museums. It is one of the best communication tools you can have. “

Goad’s work will be on display at the National Gallery of Victoria until February 6, as part of the Sampling the Future exhibition.