Singapore, December 23, 2021 (GLOBE NEWSWIRE) – (via Blockchain Wire) Have you ever wished to join a project in which the PRESALE was FULLY FILLED in less than a minute but still very early because it still has not been launched? Maybe be part of a unique low-cap token with a combination of trending topics like Mario’s dog and Elon Musk, Floki for example? Or maybe be part of a community with a strong, experienced team that continues to provide tremendous marketing?

Well, now you can have it all with… MarioFloki! 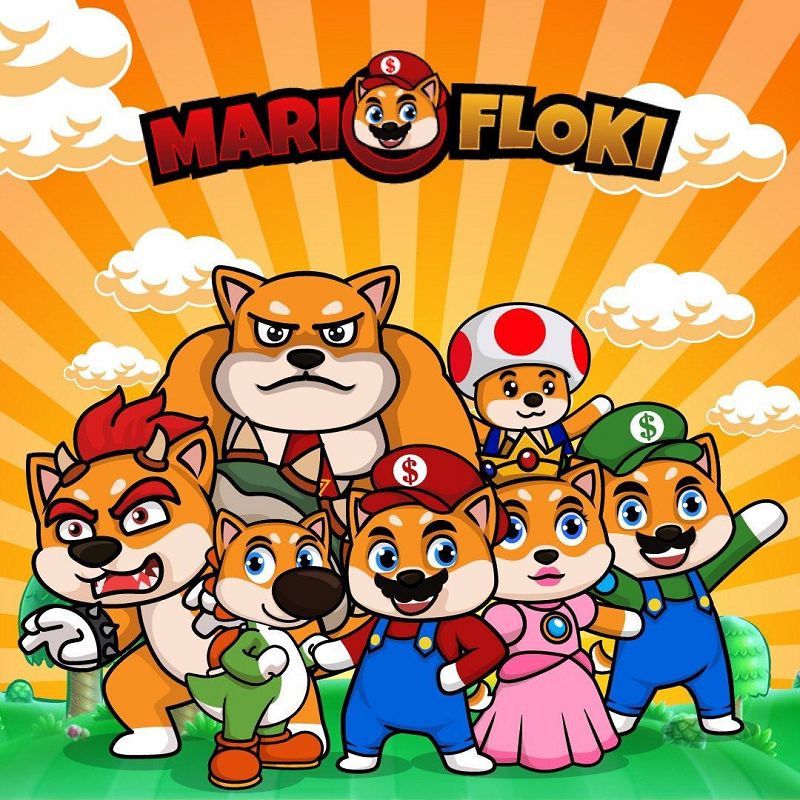 Mario Floki: The Next Big Thing In The Crypto World

Get that nostalgia for the legendary Mario game, but with a big advantageous twist – you can earn crypto just by playing it and own the cutest NFT with unique abilities. And register while you are still very early! Read on to find out how – let’s-a GO !!!

What exactly is Mario Floki?

And above all, their presale is sold out in LESS THAN 1 MIN, which is revolutionary! This has never happened before and it means a huge future for this project! And not just that, MarioFloki has some of the best marketing plans ever, one of them is an upcoming live launch video call with the legendary gold medalist, six-time US National Freestyle Wrestling Champion, KURT ANGLE December 23, 2021 !!

And the features! Well just imagine earning some token rewards just by playing a Super Mario themed minigame and then using them to earn BUSDs. There is also an NFT Marketplace where you can buy, sell, trade or HODL your favorite characters. Apart from all this, players and holders can use the tokens to actively or passively earn BUSDs through their DeFi protocol. It’s all pretty impressive but it doesn’t end there. As a member of the Mario Floki community, you make a real contribution to the well-being of children (we’ll talk about that later)!

The Pillars of Mario Floki’s World

We’ve all seen projects fail after the initial hype ended and most of the whales have sold off their holdings. The overall trading volume declines shortly thereafter, usually in parallel with the rise in FUD. The fate of a worthless token, or at least a solid use case, is often destined for the graveyard of dead crypto projects. Fortunately for the Mario Floki community, there are several pillars that lay the foundation for their token project. Let’s take a look at each pillar in detail.

Mario Floki capitalized on the NFT games which are currently booming by creating their play-to-earn (P2E) game which is reminiscent of the original side scroller from Super Mario Brothers (SMB). Who doesn’t want to play games while winning, right?

The characters that can be chosen are all inspired by the cast found in SMB and the storyline is similar as well. You will be able to select a character like MarioFloki, or FlokeyKong, or a host of other familiar characters and progress through the levels while accumulating points, collecting bonuses and gaining experience. Princess PeachFloki is being held captive, so it’s up to you to clear the stages of the MushroomFloki kingdom and fight your way to the final boss, BowserFloki.

It all sounds pretty familiar, doesn’t it? Here’s the thing – Mario Floki isn’t trying to reinvent the wheel or exploit the metaverse. Their intention is simple: let players have fun with mini-games and allow them to earn MRFLOKI tokens at the end of each level. The P2E minigame format is perfect for those who love to play but don’t want to invest hours and hours into upgrading their characters just to receive marginal payouts. Playing the game is that easy.

You have three tries, or “lives”, per day, which is similar to setting up the original SMB game. There is no reset or pause button, so there is an element of FOMO on daily chip wins if you lose all of your tries. You’ll definitely want to hone your skills as the difficulty increases with each step, but the overall gameplay is simple enough that the barrier to entry is quite low. Because P2E gaming maintains interest through leadership rankings, players are encouraged to keep playing and keep unlocking rewards. Players at the top of the leaderboard will receive community-set prizes, but you’ll need to actively play and maintain your position to see what they will be.

Rewards, Charity and the Mechanics of Winning

Alright, you get good at the P2E game and accumulate tons of $ MRFLOKI tokens. what are you doing with them After accumulating at least 100 million MRFLOKI tokens, you can earn crypto passively. Yes, you read that right ! Mario Floki’s team call this the “Super BUSD Bonus” where players can earn BUSD rewards automatically every hour as long as this minimum holding amount is maintained. Since the price of BUSD is relatively stable, you can rest assured that your crypto to fiat withdrawals will be fairly accurate and predictable.

Other competing tokens require a much higher minimum holding amount – some up to 10x more. The supply of $ MRFLOKI tokens is limited to only 1,000,000,000,000, which is also relatively small compared to other competing projects. This means that the relative scarcity of tokens and the low minimum holding amount for profits make it attractive to passive income investors. With the law of supply and demand in full force here, you can expect the price of each token to increase in value over time, especially as interest in the project grows.

As a $ MRFLOKI token holder, you will earn on every transaction. Tokenomics is configured so that for each type of transaction (buy or sell), tax is collected and redistributed to different sections of operations and as a reward to HODLers. You can earn 6-8% BUSD for these transactions, so it pays HODL – the more you own, the more taxes you will earn. What is interesting here is that of the taxes collected on sales transactions, a portion goes to charity.

Mario Floki wants to give back, not only to the investment community but also to those who need it. Mario Marathon is an online fundraising organization for children in need and the Mario Floki team took inspiration from them and reflected their idea. The team works to build partnerships with charities that work specifically to improve the lives of children. Think of children without food, shelter, medicine, disabilities or opportunities. This means that as a $ MRFLOKI token holder, you will be contributing to these charities and thus helping to transform people’s lives.

Mario Floki’s team are working on partnering up with various exchanges in the near future, so be sure to follow them through their Telegram account. Once they are listed, you can expect their token value to increase almost immediately, so be careful with that. The team plans to publish daily quizzes so that all levels of investors in the community and even non-investors have fair earning opportunities. These offer another possibility of earning rewards and while guaranteeing places on the whitelist for gifts.

Remember we talked about the playable characters in the P2E game? Special Edition characters can be purchased from the NFT Marketplace. These are not your typical NFT digital art, however. You can marvel at how beautiful it is, but since only a limited amount of each character is created, they will be really rare and as the project grows in popularity they will become coveted items.

As an added incentive, these NFTs may be playable in the P2E game. The difference with these NFTs from the original characters is that they will have some special attributes, like the ability to throw barrels if you own one of the Flokey Kong NFT Special Editions. Because the NFT can be used in the P2E game, you have an advantage in the game and it can ultimately work in your favor when you earn rewards.

Why should I join Mario Floki?

Mario Floki is a DeFi token project that allows players, investors, and HODLers to earn crypto while buying and trading in their NFT marketplace. The $ MRFLOKI token is directly correlated to your earning potential in BUSD. The more you have, the more you can earn passively, but it’s not just a way to earn crypto.

Mario Floki combines the Defi and P2E crypto games while helping to improve the lives of children, all through a cast of fun, playful and familiar characters. But what makes it so different from the rest is that this low-cap token has a record presale, a vidcall with Kurt Angle coming soon to its launch date, huge marketing plans, an amazing team and community, tons of precious gifts and gifts, and so many more bright futures to come!

If it’s not a win for everyone, I don’t know what it is. The LAUNCH is coming very soon, so be sure to jump in on the action ASAP and meet KURT ANGLE with MarioFloki! And don’t forget that you are still very early if you join it now, so be a part of it now before you get kicked out because this project is going to the moon!

To find out more about the project:

Visit their social networks to get the latest updates on their progress: