The performing arts are as old as civilization, but they have also evolved over time. As we become consumed by personalized digital content, will the pure form of theater survive? 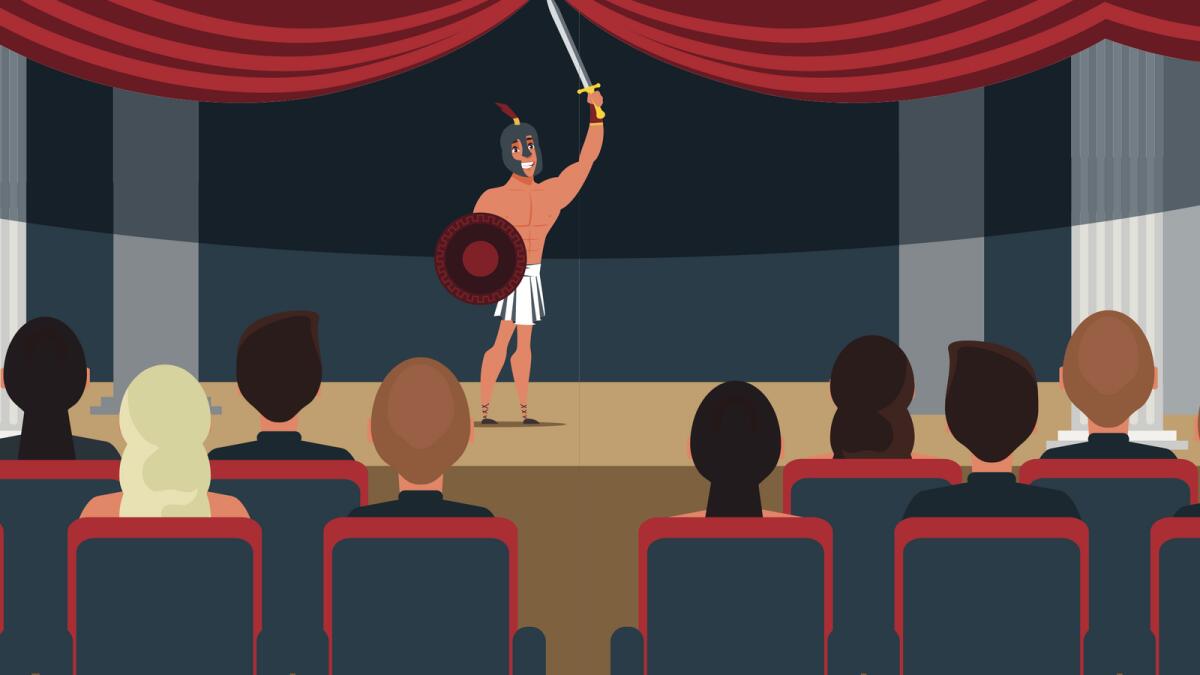 During the 2020 pandemic lockdown, when actors around the world had neither the stage nor the audience to perform, Dubai’s own theater arena, The Junction, sprang into action. He organized monologue nights, putting them all online. The audience was muted, and the cast gave live performances via Instagram, Facebook and Zoom.

Gautam Goenka, co-founder and artistic director of The Junction, describes the phenomenon as “the fusion of two mediums”. Goenka goes back in time to tell about the construction of a convergence of this scale. Almost two years ago, The Junction was involved in a play with a French group where parts of the performance took place in France and Dubai. The two were then digitally merged.

“Likewise, the Italian Embassy asked us to participate in a digital and live collaboration project bringing together artists from the United Arab Emirates, Italy and Israel to celebrate the Abrahamic Accords,” he says.

According to Goenka’s experiences, the fusion of living and digital media is becoming commonplace and, “in terms of the possibilities that exist, the sky is the limit in this new era”. Gautam runs the largest and most active community theater company in the UAE, called H72 Productions.

He cites another engaging lockdown experience. “When the doors were closed, we filmed a performance of Romeo and Juliet where each actor filmed their roles sitting at home,” he says.

But is merger the exception or the norm? Or is it the sign of the future for a performing art that has spanned the ages? Or is it just about adapting to changes brought about by technology? Goenka, who has worked in the UAE as a director, producer and actor for over 20 years, says theater has always been an art form that adapts, and it has to do it.

Alex Broun is another illustrious name in Dubai’s theatrical community. The award-winning Australian playwright and screenwriter is one of the world’s most performed 10-minute playwrights. He has produced over 100 different 10-minute songs in over 1,500 productions in over 40 countries. Broun believes that nothing takes the place of a sense of community when people come together to share a story.

“The collective live theater experience can never be replaced or outdated,” he says, adding that over-the-top (OTT) platforms and digitization have affected films more than theater. “Why do you need to go to the movies when you have the same experience of watching on a screen at home or on your laptop lying in bed? But the experience of seeing someone live in front of you in a theater can never be replicated at home, ”he says.

Digitization will never replace raw art forms such as dance, theater and even sculpture because there is “something pure about human connection unhindered by technology”. Broun predicts that technological fatigue will eventually result and people will want more human and earthly experiences. “You can see a rise of ‘poor theater’ as established by legendary Polish director Jerzy Grotowski, a theater that eschews elaborate lighting, sets and costumes to return to the pure art of storytelling and bodies in space, ”explains Broun.

So what makes a live performance so intoxicating? For some it is the experience of witnessing an actor at the top of his game, embodying a character to such depth that they become the character. Broun calls this the “pre-act of transformation,” which technology will never be able to replicate. “The big stories, the big roles, the big plays will last forever because there will always be actors who will want to play them, directors who will want to direct them and spectators who will want to watch them,” he says.

Broun has the most evocative example to illustrate this phenomenon – live performances like the Theater of Digital Art (TODA), where the actor, in this case Juan Mario Silva, performs against an immersive backdrop of the painting of Vincent Van Gogh. Going through the Metaverse versions of the digital space, watching a theatrical performance in a shared digital space isn’t much of a stretch.

Thirty years after Saif Hyder Hasan rigged his high school grade sheet to hide his failure, he has written two books, three soap operas, 14 plays and directed eight. He has also directed two films. Those early days of adventure gave him a glimpse into the drama called life and made him decide he wanted to be a storyteller. No wonder Hasan found the theater to be the best medium for this.

“The theater has a different grammar and survives in the present moment,” says Hasan, adding that the theater audience can sense the actors and vice versa. “It’s a three-way movement from actor to audience to actor and then back to audience. No other storytelling format has this dynamic,” he says. are associated with theater, Hasan admits that technology is essential for survival and prosperity.

“The theater needs to communicate with an audience that is extremely aware of what’s going on in the entertainment world,” he says. According to him, performers must tell stories using today’s tools. “Otherwise, content creators will become redundant and harass the loss of raw theater. Even the rough theater was done with the tools of its time, ”explains Hasan, who produced and directed the film Yes Papa, which is in post-production.

Hasan associates digitization with digital transmission and emphasizes that substantial digital interaction is already taking place in theater. “The lighting and sound work on digital maps and the operator only has to press a button. We use methods like reverberation and delay in sound, ”he explains. The bottom line is that digital interaction already plays a major role in the performance and editing of a production.

If digitally transmitting a piece amounts to a loss in quality, the art form will indeed lose its intrinsic charm. “I don’t think it should or will happen because at the end of the day you have a digital interface and an actor in front of you,” he says, reiterating that the charm of the live performance will always be there. “People anticipate a performance. They dress as if it was a wedding or an occasion.

Hasan also distinguishes between what is numerically possible and what is not. For him, the close-up in a digitally transmitted performance is not the same as a close-up in a digital film. “Audiences will not enjoy a digitally transmitted show because the quality will not be similar to that of a Netflix show or movie.” And if you pass it on, adapt it or give it a cinematic dimension, then it won’t be a play anymore, ”he says.

Actor, director and theater scholar, Dr. James P Mirrione was the playwright in residence of the Creative Arts Team (CAT), the resident educational theater company of New York University (NYU) from 1978 to 2005. He taught in China. , the United Arab Emirates, the Middle East and the United States. Dr Mirrione cites the National Theater in London as “the vanguard institution” providing valuable digital streaming of plays during the pandemic.

He laments that due to the length of the shutdown, the lines between the theater’s highest standards and “the wreckage and jetsam of purely entertaining streaming platforms” have started to blur. “The apex of this fusion of aesthetics, between what an audience feels when watching a live show and what it feels like when viewing at home, occurred when the Broadway show Diana: The Musical premiered on Netflix in November 2021, ”he says.

According to Dr Mirrione, filmed without an audience and using the technology for theatrical filming, the net effect was to dilute any impact the genre might have had if it had been presented in its pre-pandemic form. “Most worrying was that by resorting to the streaming of the work as a financial maneuver to recoup monetary losses, it did nothing to improve the genre or the reputation of musical theater. It has become another forgettable television product, ”he says.

Amidst the deluge of digitization, Dr Mirrione is more concerned with “a sedentary global culture”, especially in the developed world. He postulates that the pandemic has allowed us to be anti-social and exclude our environment. “The theater is a public spectacle. The thrill of being surrounded by fellow citizens watching a live performance cannot be matched by the digitization of human interaction. This [digitalisation] only serves to increase our sense of alienation from one another, ”he says.

Dr Mirrione is a Luddite when it comes to the overuse of digital and live media, stressing the need for the right balance. He cites another example, the Broadway Network show, which adapted the film into a play. “It was looking to recreate the bombastic style of TV journalism in the context of live drama on stage,” he says, saying that when used well, it can move the plot and actions forward. “However, when used as an excuse to supplant drama with visuals, then the effect is to bow to the lowest common denominator,” he sums up quite succinctly.

Traveling writer, filmmaker and storyteller Alison Richards now basks in her new avatar as the founder and creator of Film Co-Op, a hybrid of traditional studios and independent production houses. She still prefers live events despite having been involved in videos and movies for over 35 years. “We were blown away by special effects and digital technology, but the result is a good story with universal appeal to the audience,” she says.

True stories showcase the human spirit for Richards, and the trick these days – as Saif Hyder Hasan claimed earlier – is to present using the best tools available. She illustrates her point with her most fashionable fusion experiment in which a Sketch Comedy Group was formed with a CBC Radio comedy writer. “They took the scripts in radio format and turned them into sketches for live shows,” she says. His reasoning behind the experiment is self-explanatory. “Genuine interaction with an audience is the greatest success an artist can achieve. No technology can beat that, ”says Richards.

Theater scholar Dr James P Mirrione seems to have the most appropriate diagnosis in this live vs. digital debate. For him, the technological digitization of everything we encounter on a daily basis only serves to distract us. “We slide, turn off, change channels and look away with increasingly shorter attention spans. It is not progress; it is a regression ”, summarizes Dr Mirrione the drama encompassing the world of the theater.