A Pollinator Park in Europe and a Museum at the Artic Circle: 8 Unbuilt Projects from Established Firms

This week’s curated selection of Best Unbuilt Architecture highlights designs submitted by established architecture practices, featuring conceptual works, competition entries and projects in different stages of development. From a pollinator park designed for an EU initiative to a greenhouse residential project in Germany, to a museum in the Arctics or an innovative proposal for harvesting renewable energy in the Netherlands, the following showcases a variety of design approaches, programs and scales.

Featuring firms like Vincent Callebaut Architectures, 10 Design, Antonio Citterio Patricia Viel, or Sweco, this week’s selection of unbuilt projects highlights worldwide interventions that illustrate a variety of ideas, from new models for collective housing and community-living, to design for ecology and sustainability, to community-oriented cultural architecture. 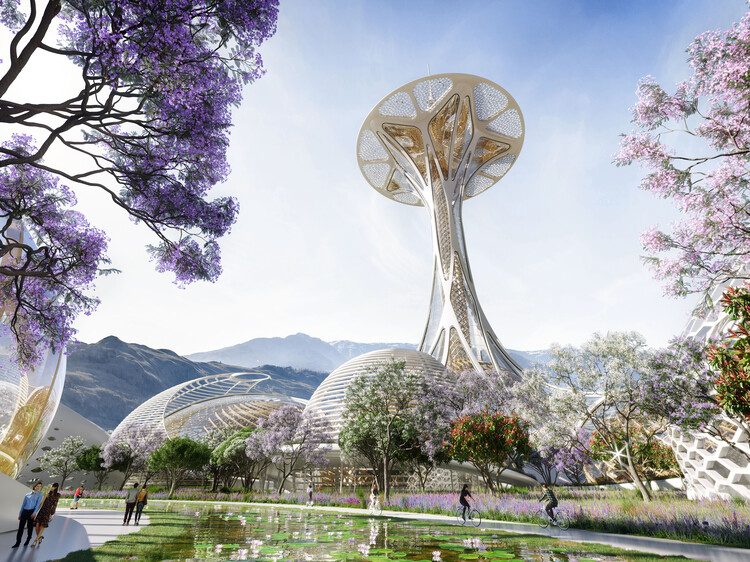 Read on to discover 8 selected projects at different stages of development, with their respective descriptions from the architects.

As of 2020, pollinators are seriously threatened with an extinction rate that is “100 to 1,000 times higher than normal”, according to the UN. Raising awareness among children and European citizens of measures to tackle this decline is the major objective of Pollinator Park. In order to preserve and restore the biodiversity of pollinating fauna, Pollinator Park is a true demonstrator on a real scale. From the Miro’s Meadow to the Hungry Hive, via the Urban Lab and the Zoom Room, it promotes the noble role of the farming profession. It shows good practices in pollinator preservation on multiple levels: territorial land-use, agricultural, forest, and urban.

The new concert hall for the city of Turku in Finland is designed for diverse encounters at different levels: urban, artistic, functional and cultural. The architecture of the building serves as a platform to help foster a sense of community and enable new forms of activities and events. The 1,300-seat concert hall will feature world-class acoustics in an optimally modified shoebox auditorium that immerses the audience and orchestra in music. The 300-seat multifunctional hall is designed to flexibly accommodate a variety of uses. The building will leave as much as possible of the existing square open to retain views of the river from the theatre and the government office building.

The mixed-use development comprises offices and residential areas in addition to hospitality, retail and leisure space. The proposal includes the design of a 20,000-capacity football stadium and a VR centre designed to further enhance the urban development of the south end of Downtown Raleigh, North Carolina. 10 Design’s vision for Raleigh is to develop a new borough that builds upon the emerging creative industry of the East Coast by providing brand-new homes and public areas for the community and contributing to the reactivation of the southern district of the city, complementing the research triangle to the north of the city.

International architecture and interior design practice Antonio Citterio Patricia Viel (ACPV) unveils the design of Gate Central, a new mixed-use complex conceived in the spirit of sustainable urban development. Located a stone’s throw away from some of Milan’s most visited monuments, Gate Central will offer 1,700 sqm of residential and retail spaces while regenerating an area that was heavily bombarded in wartime Milan, reimagining it for public enjoyment and as a lively residential space.

The Neu-Stephani quarter is the site of a very special housing project with a sophisticated energy concept: a residential greenhouse. The building comprises three principal components: a residential timber block, the superimposed greenhouse and the connecting access pergola. The residential building is executed as a fully prefabricated, modular timber structure that is merely assembled on site. Depending upon how the modules are combined, the building can contain between 30 and 54 residential units. Above this, one finds a greenhouse, which is not only available to the residents for private urban farming but will also be used commercially by startups.

For the Our Energy Our Landscape design challenge, a multidisciplinary team of VenhoevenCS, DS landschapsarchitecten, and Studio Solarix developed an innovative proposal that generates renewable energy while restoring natural connective routes for wildlife. The design for an ultra-light web over the motorway was created for the challenge location in the Netherlands but can be applied to other sites globally. This proposal supports small-scale ecosystems, contributing to a large-scale approach to climate change and biodiversity loss – hence The Butterfly Effect.

The “almanak” is a method and architectural approach that establishes the community while defining the architecture. The architectural typology, an “almanak”, is a microcosm where the ground floor unites the landscape and the community, and the upper part – a continuous wooden deck structure – creates individual homes with high spatial quality. The housing communities are arranged in housing clusters around a shared courtyard. The housing clusters are bound together by a larger urban landscape space, where communities of varying sizes and with varied content create an eventful landscape connection across the buildings and bind it together with the surrounding housing clusters.

The former House of Commerce — one of the architectural examples of Soviet modernism in Norilsk, the world’s northernmost city — was selected as the site for the Arctic Museum of Modern Art. The new building is designed to stand out from the surrounding landscape. The facade, clad in vertical, lightly-tinted metal lamellas, looks out of focus in the daytime due to the play of light, while at night, it glows softly and fragmentarily.

HOW TO SUBMIT AN UNBUILT PROJECT

We highly appreciate the input from our readers and are always happy to see more projects designed by them. If you have an Unbuilt project to submit, click here and follow the guidelines. Our curators will review your submission and get back to you in case it is selected for a feature.